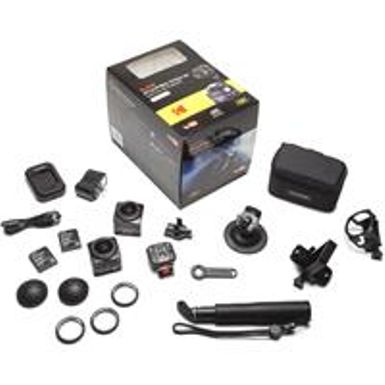 Kodak SP360 4K Action Cam Dual Pro Pack
Are you ready to dive into the world of immersive video? The Kodak Pixpro SP360 4K Action Cam Dual Pro Pack gives you everything you need to start capturing 360-degree spherical video, right out of the box. The Dual Pro Pack includes two SP360 4K action cameras that can be set to capture up to 4K 16:9 rectangular videos or circular fish-eye footage. But when you mount the two cameras together using the Dual Camera Base Mount (included in the kit), you can now capture spherical 360-degree video. Free software lets you stitch the two videos together with ease.

With a 360-degree Spherical Lens and a 235-degree field of view, the Kodak Pixpro SP360 4K Action Cam puts the ability to capture incredibly clear and detailed action video in the palm of your hand.

Exposure is a cinch with artificial intelligence-driven autoexposure. The camera is tough, able to handle rain, cold (freezeproof to 14 degrees F), dust, and drops up to approximately 6 feet. A level gauge, a necessity for spherical videos, can be seen on the built-in 1-inch LCD screen.

An entry-level Premier pack is also available; it includes a single SP360K VR camera and basic accessories so you can use it right out of the box.

In order to combine the two videos into a single 360-degree VR experience, Kodak has created PIXPRO SP360 Stitch Software. Compatible with both Mac and PC, it allows you to effortlessly combine the two videos into one mind-blowingly detailed and sharp immersive video. Videos can be further refined using PIXPRO SP360 4K Editing Software, which will transcribe and upload to YouTube or Facebook. Both applications are free.

Finally, you can remotely view and control your Pixpro SP360 from your Android or iOS mobile device using the free PIXPRO Remote Viewer.