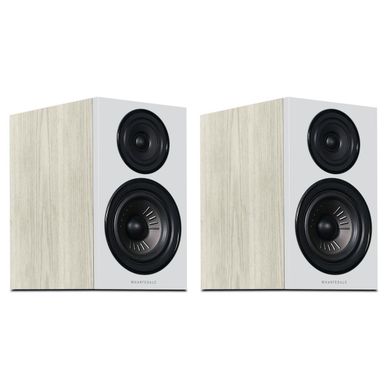 In the early 1980s, Wharfedale created the blueprint for modern 'budget' hi-fi speakers when it made the first-ever DIAMOND. Through successive generations, the Wharfedale DIAMOND has remained the most famous name in budget hi-fi speakers worldwide. The launch of a new DIAMOND range is always a major hi-fi event and this campaign will introduce the latest generation of DIAMOND loudspeakers to the world.

Many DIAMOND models have won awards over the years - since the turn of the millennium, the DIAMOND 8 Series, DIAMOND 9 Series, DIAMOND 10 Series and DIAMOND 200 Series have all yielded What Hi-Fi? Award-winners.

But the all new DIAMOND 12 Series is the best DIAMOND range yet! Developed in collaboration with Karl-Heinz Fink - one of the most successful loudspeaker designers on the planet. Classic DIAMOND price points, industrial design that's cool and contemporary yet still distinctly Wharfedale, and sound that delivers a new 'budget' benchmark through exceptional acoustic design and engineering.

A Magnet of Forces
A precision-made magnet system with an aluminum compensation ring to minimise the effect of variations in inductance as the voice coil travels. This contributes to an absence of distortion and intermodulation generated by the 'motor system'.

A Voice Coil Beyond this Class
The voice coil is wound on a high-power epoxy/glass fiber bobbin-highly unusual in speakers at this price level. This has the advantage of not adding eddy currents and delivering greater power handling than an aluminum bobbin, whilst also being much stiffer than the Kapton type associated with this price-class.

DIAMOND Highs
The 25mm dome is made from a woven polyester film with a high-loss coating to deliver open and smoothly extended high frequencies. The magnet system and the front plate have been optimised for wide dispersion and uncompressed behaviour. The front plate is flat and exposes the dome as much as possible; only a very short duct on the front plate balances the acoustic load and improves the SPL (sound pressure level) measurement.

A Crossover of Style
The crossover network uses an acoustic LKR 24dB topology. This includes air core inductors of the type more commonly found in high-end speakers, selected because they produce the lowest distortion of all inductor types. As the resistance of the coil is higher than a standard laminated steel or ferrite core inductor, the magnetic structure of the mid/bass driver has been modified to compensate, resulting in fast, clean bass with no distortion from the inductor.

Brace oneself
Inside the cabinet, Intelligent Spot Bracing connects opposite walls with a specific form of wood brace to achieve optimal reduction of cabinet resonance. These braces are precisely modelled by computer simulation to improve upon the commonplace 'figure of eight' brace, which may simply transfer resonance from one wall to another.

Always on trend
Finished in a choice of black, white, light oak or walnut.