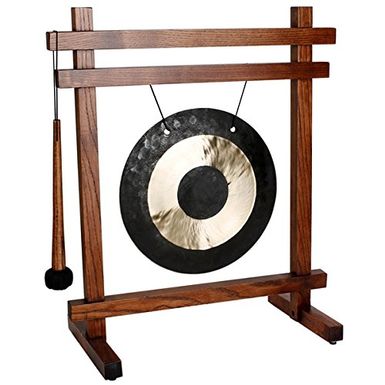 Nothing has the ability to transport us to another time and place quite like the brilliant resonance of a gong. For over a thousand years, gongs of various types have played an important role in both the religious and secular music of many Asian cultures. Gongs were sounded to chase away evil spirits, warn of invading armies, heal the sick and invoke the spirits of the dead. To be touched by a gong was said to bring happiness and strength. Today, this revered instrument of warriors, emperors, princes and priests adds a special aura to any setting. Handcrafted using traditional methods, Woodstock Gongs brings the ancient wonders of the Far East home. Over 30 years ago, Grammy award-winning musician and instrument designer Garry Kvistad created the first Woodstock Chime from an aluminum lawn chair he found in a landfill. Fascinated by the Scale of Olympos, a 7th century pentatonic scale that can't be played on a modern piano, Garry cut and tuned the lawn chair tubes to the exact frequency of the ancient scale. The resulting Chimes of Olympos was the first Woodstock Chime and is still one of our best selling, musically-tuned windchimes. Garry and his wife Diane founded Woodstock Chimes in 1979 and still develop the chimes today. It remains a family-owned business in New York's Hudson Valley.